Kanye West repeated his anti-Semitic remarks from October and November, professing his "love" for Adolf Hitler and denying that the Holocaust happened. 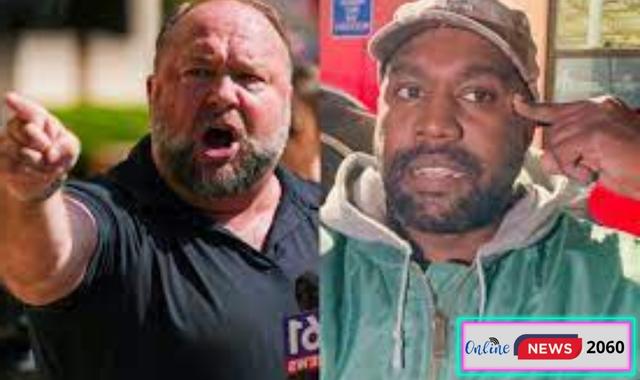 West, who now calls himself Ye, made the comments Thursday during Alex Jones' InfoWars podcast, where even the host, an alt-right politician, protested the rapper's statements.

Many public figures have spoken out against Ye's remarks, while the Republican Jewish Coalition said, "Enough is enough." It called the show, which also featured white supremacist Nick Fuentes, a "horrible cesspool of dangerous, bigoted Jew-hatred"

In the nearly three-hour broadcast, West made a series of statements referring to Hitler, Nazis and the Holocaust.

Here's a rundown of all of Ye's anti-Semitic statements during his appearance on InfoWars with Jones and Fuentes.

Jones: I've studied a lot. I think Hitler was a really bad person and I reject what Hitler did. I know that British intelligence set a trap for him and used him

Jones: I don't like Hitler. I know you're trying to shock with this.

West: I'm not trying to be shocking. I like Hitler. I... the Holocaust isn't what happened. Let's look at the facts. Hitler has many redeeming qualities

This is West's first statement that the Holocaust "didn't happen." His new acquaintance Fuentes is also a known Holocaust denier.

According to the United States Holocaust Memorial Museum, as well as numerous other historical fact-checkers, approximately 6 million Jews were killed in Europe during the Holocaust between 1941 and 1945.

In a music from his 2011 album with Jay-Z, Watch the Throne, West noted the tournament in his tune "Who Gon Stop Me" The first line of the song sung by using West reads, "This is some thing like the Holocaust, thousands and thousands of our people lost."

At various factors in the interview, West also held up a small net and spoke in a high-pitched voice, reputedly imitating Benjamin Netanyahu, the former high minister of Israel.

Jones: Well, CNN says white people are evil Nazis, so I don't agree with those statements, but I understand the...

West: I don't like the word 'evil' in the context of Nazis. I assume we need to look at..." Alex Jones laughs, and West pauses to snigger along.

Jones is a staunch opponent of the CNN news network, but he exaggerates when he claims that the news network claims "white people are evil Nazis"

Jones: In my opinion, Nazis were thugs who beat people up and did a lot of really bad things

West: But they also did good things. We need to stop badmouthing the Nazis all the time.

West: The Jewish media have made us feel that the Nazis and Hitler never brought anything of value to the world.

Jones: OK then why would the Zionists kill Jews en masse in Israel with a poison gun?

Jones is a well-known conspiracy theorist himself, and there's apparently no evidence to support his claim that Zionists, people who support the development of Israel as a Jewish nation, are killing people "en masse"

Jones: Can we just say you liked the uniforms, but that's about it?

West: No. There are a lot of things I love about Hitler. A lot of things. Hey, Netin, what do you think of this Netin? west: 'This is madness. You're a madman.'

West expands on his speech when he says there are things he "loves" about Hitler. He raises his voice again as he personifies Netanyahu as his net.

West: 'The Germans used to have a really cool leader.

West: And he didn't kill 6 million Jews. That's just factually wrong. But for the ADL (Anti-Defamation League), I'll say that there are a lot of good Nazis who fought for their country and for everybody.

West: And that they're all put in a box. They're all in a box. Every Nazi is bad? Could it be that some of the Nazis were just fighting for their country? Oh, they all say, 'Oh, we can't put them all in one box'

Jones said businessman and philanthropist Soros is a "Nazi," but that doesn't seem to be true. Born Gyoergy Schwartz in 1930, Soros survived the Nazi occupation of his native Hungary until the end of World War II in 1945.

West's claim that the Nazis were only "fighting for their country" is an argument that's been made for decades and has also been used as a legal defense.

"Superior orders" or the "Nuremberg defense" used to be a frequent objection raised via Nazi troopers in the course of the Nuremberg trials in Germany from Nov. 20, 1945, to Oct. 1, 1946, although it's still disputed whether this is a valid defense.

Newsweek has reached out to the Anti-Defamation League for a response to West's statements.